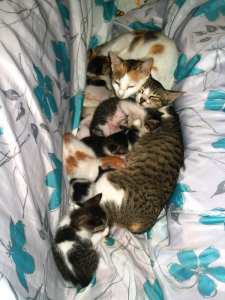 I never expected to have a pet cat. But, a few years ago, when my daughter discovered two abandoned kittens in an unoccupied house, we took them and took care of them. One died shortly, but the other one, a male we call “Mow” (pronounced to rhyme with “cow”) grew up part pet, part street cat. We kept one window of our house open so that he could sleep and eat inside the house whenever he wanted to, and explore the outside world the rest of the time. Last year, we were surprised to see that Mow had invited two females inside the house. The tri-colored one we called “TC” and the dark gray one we called “Agatha.” They would sleep on or under the sofa at night and leave the next morning. Pretty soon the two females became pregnant and Agatha stopped coming inside the house. Last month, TC brought three kittens into the house during a rainstorm, but brought them outside a few days later when the rains stopped. Two weeks ago, it started to rain again, and we were surprised to see TC bring in eight kittens. The mystery was solved when Agatha arrived some time later. These two moms now take turns taking care of their kittens.

I was reading this page containing a few meta-jokes, then read the Wikipedia page for meta-jokes. I liked the joke templates, in particular. Here’s an example:

Three people of different nationalities walk into a bar. Two of them say something smart, and the third one makes a mockery of his fellow countrymen by acting stupid.

A few days ago, I bought from a BOOKSALE outlet two issues of Gibbons Stamp Monthly. I had heard about it many years ago, but I never expected to find copies of the magazine in the Philippines. I am extremely impressed with its high-quality formatting and content. I learned about the recent sale of the British Guiana One-Cent Black on Magenta from the August 2014 issue. The two issues each had 146 A4-sized pages.

“The Story of the World’s Rarest and Most Famous Stamp” was the title of the catalogue note when the British Guiana One-Cent Black on Magenta was scheduled to be sold at auction by Sotheby’s New York on June 17, 2014. (The picture above is an edited version of a picture from Wikimedia Commons.) From the Sotheby’s page:

For the fourth time in its illustrious history, the British Guiana One-Cent Black on Magenta set a new world auction record for any stamp yesterday at Sotheby’s New York, achieving $9,480,000 – nearly 1 billion times its original face value. No stamp is rarer than the sole-surviving example of the British Guiana, a unique yet unassuming penny issue from 1856, which has been heralded as the pinnacle of stamp collecting for more than a century.